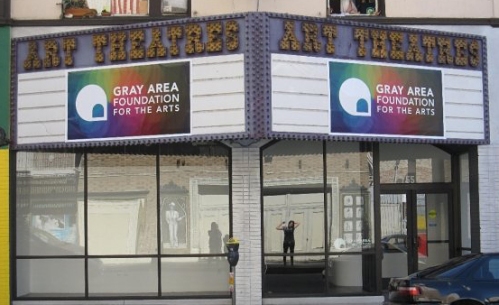 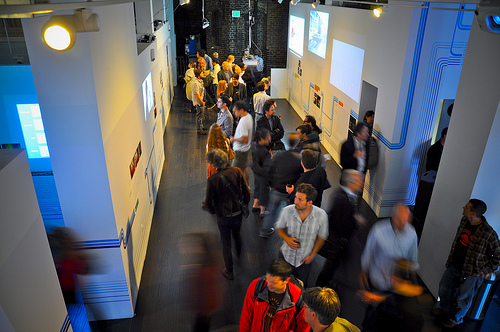 My first visit was on Mayday for a one night event called Alchemy produced by the arty/tech Burner crew False Profit [www.false-profit.com]. It proved to be a night full of all sorts of arty and interactive fun and games. I left grateful not only for False Profit, but also for this new and adventurous venue.

My second visit to GAFFTA was on June 11th for the opening night of a festival co-produced by GAFFTA and KQED called “City Centered” – a festival of “Locative Media and Urban Community.” Locative media (basically connecting digital tech to analog place) is new and exciting stuff, and it was clear from their schedule of events, that they were attempting a serious and fairly comprehensive survey of the field.

FRIDAY night’s gallery reception was for a show called “SENSEable Cities: Exploring Urban Futures.” It featured a range of projects generated since 2003 by MIT’s SENSEable City Laboratory. These projects looked at how data could be extracted from various sources and used to interpret and contextualize patterns of human and technology-mediated behavior. It’s high-end research-based creative work – abstract and “clean” but with some clever surprises as well. This type of work seems very much in line with the projects being done by GAFFTA’s local team of artist/developers. The SENSEable Cities show remains up until August 11, so GO check it out.

That same night I reconnected with new media vet and GAFFTA board member Peter Hirshberg, who played a leading role in the birthing of the enterprise. He introduced me to GAFFTA’s  Executive Director, Josette Melchor. As the conversations continued, I ended up being among the last to leave that night. Here is a link to a presentation the two of them did for TEDX Silicon Valley this past spring.

SATURDAY day consisted of a “free” locative media symposium held at KQED with panels that addressed both its political and social applications. Unfortunately, I could not attend. I will try to locate a report somewhere.

SUNDAY was the Art Walk day from 10am-4pm. Ten curated projects had been funded and were mostly positioned around the Taylor and Market intersection. As I had been up till dawn that morning, getting my “fuzzy” self into the city by mid-day was an indication of my determination not to miss what was happening.

Among the projects I saw..

The Tenderloin Tech Lab is a busy neighborhood technology training center, which showed some interesting neighborhood-related location projects; one that mapped existing Wi-Fi networks and another that tracked nearby decibel levels. There was also a web project that captured sound narratives of Tenderloin residents and lab users.

Stefano Corazza’s virtual reality installation over at the legendary Luggage Store Gallery, put you in the POV of a seagull requiring you to use your wide-spread arms to fly over San Francisco.

Some faculty members from Georgia Tech had come to demo “Urban Remix” – a free iPhone app which allows you to easily record sounds and take photos and upload them to a central server which an on-site sound designer then downloaded and remixed live. As a live event producer always looking for new ways to engage audiences, this is the kind of development track that I find especially interesting.

Several blocks away on O’Farrell between Van Ness and Polk, radio producer Krissy Clark’s “Block of Time” had you standing in front of marked doorways as you called a cell phone number and listened to a story specific to that historical spot.

Matthew Roberts’ “Simple Steps” sent folks walking the neighborhood with a simple digital camera attached to their arm and automatically capturing images of the rarely noticed space over their heads.

I had several extended conversations with various attendees and artists, and left not only appreciative of the considerable effort that went into presenting the festival, but also for the existence of this new Bay Area arts organization that had the vision to even conceive it!

All the World’s an Electronic Stage – Rediscovering McLuhan

I was thinking about the migration of personal technology away from computers and towards mobile “appliances,” which got me to thinking about the eruption of the applications that have quickly followed in the wake of the mobile jetski; Twitter, Loopt, Kyte, Shazam, Starwalk, Red Laser..etc.

I had already been thinking a lot about the “world as gameboard” – about the city as a locus of mass diversity and social transformation and the whole sense of how we are maintaining and tracking personal connections based largely on quick blips – fragments of information.

An article a few weeks ago in the NY Times, said that social scientists were calling this phenomenon “ambient awareness.”

As an event producer, I recognized this notion of “ambient awareness,” as exactly what people do at a party – how they energetically interact with each other and with the crowd – oftentimes even without speaking – which at certain decibel levels is a challenge in itself. 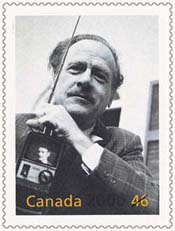 Anyway, that got me thinking of that old Marshall McLuhan idea of a “global village.”

I did a search on McLuhan and came across a bunch of videos. There were a lot more of them than I realized. (Here’s a link to a bunch of them) In one particular one, he said this..

“..huge involvement in everybody else’s affairs.”

That hit me like a flat panel display. The guy was so incredibly prescient! He knew THEN what we are just coming ‘round to experiencing NOW – and he knew it 50 years ago!

The “global village” – even in his lifetime, he called it the “global theater.” He knew that we were being re-tribalized to shed our isolation and to wrap ourselves in this electronic skin, so that we might be able to play a multitude of “roles” and play them in relationship to an almost unlimited number of other actors. 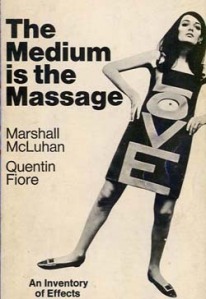 I looked at more videos, and in each, he made 2 or 3 or more completely mind-bending statements. And the capper? He was a rapper – The guy was way too cool and way too funny. He knew that humor was meant to address grievances. Like he said.. “I wouldn’t have seen it, if I hadn‘t believed it.”

Another of his quotes, referring to the artist – “..he is always thought of being way ahead of his time because he lives in the present.” That’s him to a T – nailed in the now, blowing his jazz – just like Louis and Dizzy and Bird.

In the search results was a video by another Joyce scholar and another of my all-time favorite jazz-heads – Terence McKenna, who said this..

“They made of him an icon of cultural incomprehensibility. Not since Einstein have you been so pre-programmed in advance to believe you “ain’t going to understand this guy.” And that’s what they said about McLuhan, and consequently his message and his insight failed. We will have to reinvent McLuhan around the turn of the century because we are producing forms of media of such interactive power and potential social impact that we’re going to have to go back and re-think all of this.”

Everywhere we go now, McLuhan’s vision as well as his redemption precedes us. Like an electronic Nostradamus, he knew where technology was leading us, and he knew it was going to be a wild ride.

I recently finished a book entitled “The Social Atom” by physicist Mark Buchanan. In the book, he lays out the case for a science of social behavior that casts off the old reason-centric model for one that more closely maps to recent scientific discoveries.

The term he uses, “social physics” seems to have gained some foothold in the Google-driven public lexicon.

As I understand it, the defining aspects of social physics have to do with the consideration of behaviors not as the sum of rational human agencies, but as a shifting play of genetic and cultural legacies.

Late to the party “rationality,” he says, rests atop a much more elemental bedrock of instinctive behaviors that have come down to us by virtue of the great preponderance of evolutionary time our progenitors spent as hunter-gatherers traveling about in groups of a few dozen or so. 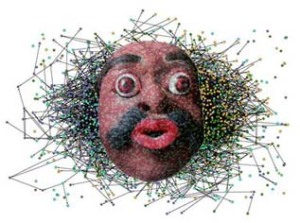 Under such circumstances, individual success or failure was largely determined by one’s ability to respond, adapt and form quick alliances within the tribe, while at the same time being very cautious towards outsiders who might threaten the safety of the group.

Behaviors thus emerge in such environments that are not so beneficial to any one individual, as they are to the survival of the group.

He says that behind our rational public persona lies a psyche that “seems to be ruled by ancient spirits making quick and brutal judgments with little time for nuance and subtlety.”

On the plus side, such instinctive responses allow for quick and nimble adaptations and agile course corrections. We try things out and when we see we are wrong or that our efforts are not producing positive results, we switch course. That determination is based on two primary inputs – our own experience as well as our observation of and proximity to others.

Buchanan says that.. “This is the real secret of our intelligence: our ability to follow simple steps and to adjust and learn.”

What he says is that close to the core, we are each of us descended from gamblers and opportunists who are all very hard-wired into responding to the consensus. This can have both good and bad implications.

“The average man is destitute of independence of opinion. He is not interested in contriving an opinion of his own, by study and reflection, but is only anxious to find out what his neighbor’s opinion is and slavishly adopt it. ” (Mark Twain)

While it is comforting to imagine that reason rules our action, the truth as to what guides our actions looks to be altogether less obvious.

The implications for communicators  are obvious. The presentation begins the moment you enter the room – scan the crowd well and reflect them long enough to allow them to feel you as one of their own and so more ready to become allies to the ideas you are about to offer them.

To be human is to be at once divided and united. As we grow more interdependent, we find ourselves thrown together by the commonality of our circumstances, but still separated by the individuality of our desires.

On one hand, we are airborne angels of the science fiction future, and on the other, steaming mammals trapped in ancient labyrinths – ready to rip apart any heroic adventurer who would dare to call us towards transformative liberation.

Crowds – tribes – groups – families – all variants of self in community – at once as instinctive as they are intelligent and as irrational as they are necessary.

Which will it be this time? Will we rise together to the “new” occasion? Or will we succumb to the divisive and polarizing pulls of gravity and self-preservation?

Polarize or tribalize.. Art allows us to make sense of the present moment. Science and technology help us to put it on the map, so that we can direct others to it.

Which way does the wheel turn, and who or what is behind that wheel?

Destiny? Will? God? Evolution? Luck? All and Everything? No doubt.

Each of us in our time gets to lead and to follow… there is a time for both.. and knowing the nature of the many roles we must play and when exactly is the right time to engage is all part of our evolution as individuals and collectives.